Whichever way you look at it, young folk are the future. Latest figures from the Government show that almost a million UK people aged between 16 and 24 are unemployed. The figures are mirrored across Europe with youth unemployment hitting 23% this August. We're interested in the ideas and initiatives that will provide solutions to this massive social problem. And we're seeking to collaborate with some of the sharpest, most intelligent and creative young folk out there. But the talent we want to work with is short on hope and belief. They lack support, community, voice, family, learning and inspiration. We want to help change that. 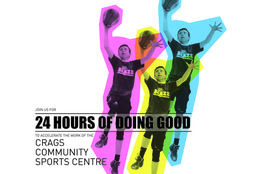 The Crags Community Sports Centre is entering a new exciting phase of their existence after having proven that the facility is a valuable asset to the local community in Central Edinburgh. For one crisp November day, we hacked at some ideas to help give form to their new direction..

Steve King first showed me this; should've warbled..perhaps I have more time.

I watched this 13 year old kid do a TED talk and then I watched it again with my wife.

His message is that when he grows up he wants to be happy and healthy. Not great at trigonometry, or a wonderful robotic office worker. Does traditional formal education help him in the direction he wants or does it go other way instead?

I liked the 8 big things that he thinks provide health and happiness: Exercise, Diet/nutrition, Time in Nature, Contribution and Service, Relationships, Recreation, Relaxation, and Religious / Spiritual. He's hacking his own education to make these 8 factors the priority. More likely to land you on TED than getting 18/20 in your weekly spelling test...

One of the most interesting things I learnt this week is that Estonia is a pioneer in developing (it was the birthplace of Skype) and integrating technology into the way the country functions. Everything from the way their government functions, to provision of health care, through to skills in schools.

Of course all countries are facing the same challenges to integrating digital skills and technologies into education, the UK announced that it plans to increase the provision of coding classes in secondary school - but in Estonia they're going one step further and teaching primary school children to code via a project called ProgeTiiger.

By teaching kids when they're that bit younger they're not only more receptive and have greater potential to really utilise the skills for the long term, but is also a natural progression. As we see younger and younger kids consuming technology isn't it an obvious move to equip and enable children to be able to create, play and manipulate it the technology to make it relevant for them - instead of waiting until they're 15 and are distracted teenagers?

The founder of the project Ave Lauringson sums it up nicely:

“We want to change thinking that computers and programs are just things as they are. There is an opportunity to create something, and be a smart user of technology,”

So maybe we can take a leaf out of Estonia's book and think about the best time to equip the future youth with powerful digital skills, before it's too late.

It's just an illusion

Here's me, last week, doing a Santa gig at a local nursery school...

All very nice, except if you consider that what I’m really doing is telling 40 kids a bunch of lies, to coerce them into good behaviour.

Oh well, it’s OK really; not much harm done. We have a mechanism to shatter that particular illusion without causing much damage.

There are much more harmful illusions for us to worry about putting them under:

Even though the truth of these old mantras is increasingly being doubted, there’s a long way to go before we start embracing reality. And in the meantime there’s another generation being conditioned to believe dangerous lies.

How can these illusions get shattered like the Santa myth so we can give young folk something to play with that isn’t broken?

That’s a question worth pondering over the holidays...

Digital Explorer is on a mission to provide a world-class global citizenship education for young people. They do this by creating unique collaborations between explorers, scientists, teachers and pupils linking expeditions in the field live with classrooms, face-to-face visits with explorers and scientists, talks and engagement days.

Launching in January 2013, Discoverables will be an open-ended, gamifiedonline journey that enables young people to be the architects of their ownstory and aspirations discovering their own latent powers, as well as thesoft skills needed to flourish in work and in life.Through the site, they'll be able to curate and showcase who they are andwhat they've done, so that potential employers or investors can discover them.

Only Connect is a creative arts company for prisoners, ex-offenders and young people at risk of crime. Their vision is of reformed ex-offenders using their experiences of crime and punishment to help the next generation avoid the mistakes they made - giving young people a better future, redeeming their own lost years, and making London safer for everyone.

What is a MOOC?

Taking education online is a live challenge, everyone's having a go at it, from the grassroots to Google. Turns out there's a term for this kind of teaching, Massive Open Online Courses (MOOCs).

In poverty-stricken countries, once a girl reaches adolescence, she's at a crossroads: Either she gets a chance, i.e. she gets an education, she stays HIV negative, marries when she chooses and raises a healthy family. Or none of these things happen. She is illiterate, married off, isolated, pregnant, vulnerable to HIV and stuck in a cycle of poverty.

In the 2 minutes you will spend reading this post:

People and organisations (Nike’s Girl Effect for one) are starting to realise that if poverty is to be meaningfully addressed, family planning for adolescent girls should be top of the agenda. During the London Summit on Family Planning back in July, more than 150 leaders from the public and private sector joined forces to increase access to lifesaving contraceptives in the developing world. Over $2.6 billion was committed to get modern family planning to 120 million girls & women in the world’s poorest countries by 2020.

I’ve been closely following the development of The Dreamers’ Supply Company, a new project that enables marginalised young people to develop their creative, collaborative and entrepreneurial skills, thought up by youth charity Spark+Mettle.

Young people are teamed up with talented professionals, and together they design, prototype, build and sell dream-realising products. I went along to one of the ‘making’ sessions back in April where the seeds were planted for the impressive final products being sold during the London Design Festival next week (14-23 Sept) at the Design Museum.

Eugenie from Spark+Mettle found inspiration for Dreamers’ Supply Company from working for 826 Valencia, an American non-profit whose stores sell unusual oddities. The project is funded by the RSA’s Catalyst programme, which awards small grants to ideas with a tangible social impact.

Good For Nothing is powered by